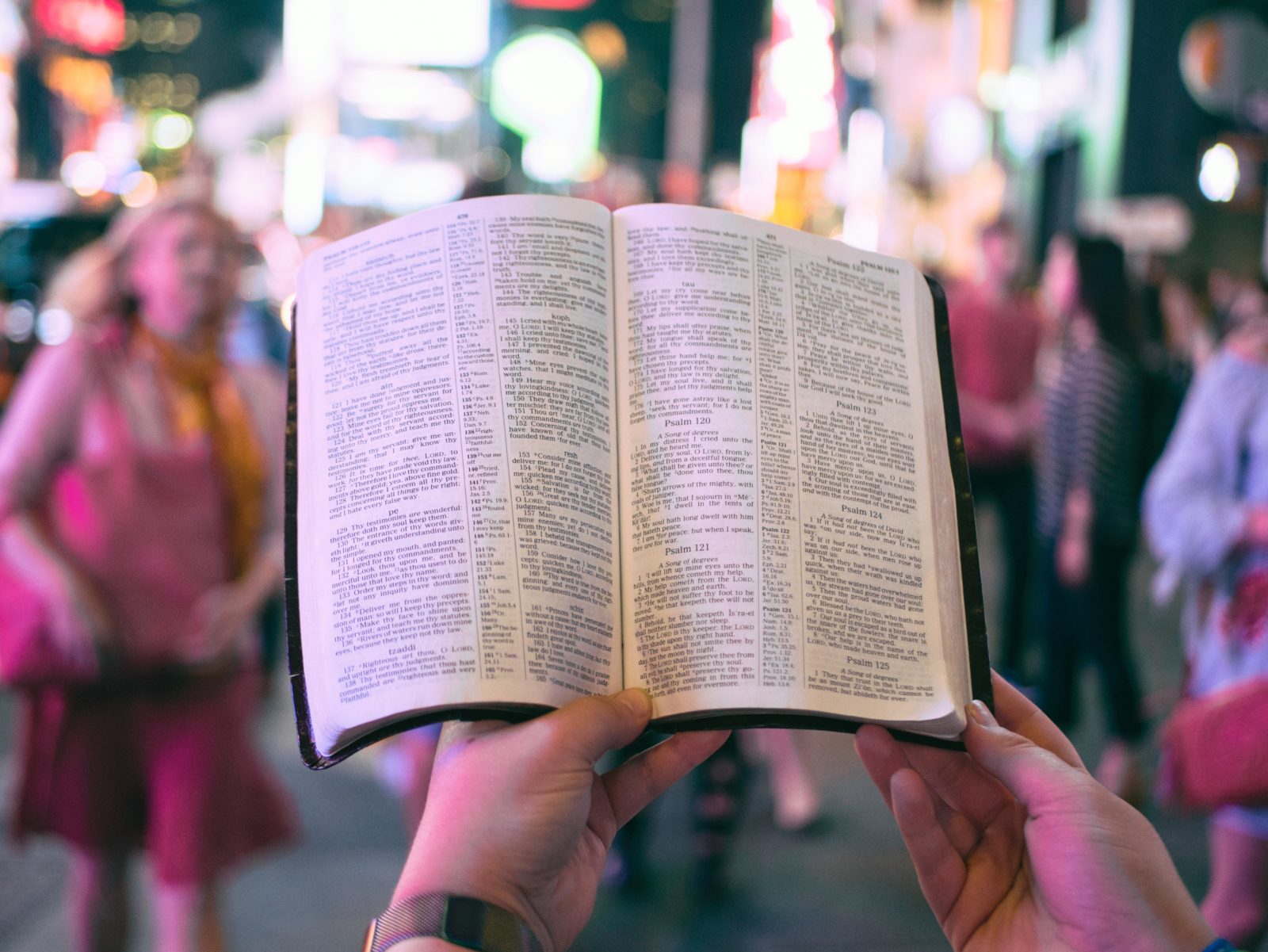 Some time ago posted an article from the Daily Caller on Facebook that read;

“A bill that passed the California state senate and is now moving through the Assembly could threaten jail time for anyone who refuses to use a transgender person’s preferred pronoun.”

The law is currently limited in its effects to nursing homes and intermediate-care facilities, but if passed, those who “willfully and repeatedly” refuse “to use a transgender resident’s preferred name or pronouns” could be slapped with a $1,000 fine and up to one year in prison, according to the California Health and Safety Code. The state Senate passed the bill 26-12 at the end of May. Since then, the Assembly Judiciary committee recommended the bill unanimously and the General Assembly held its first hearing on the legislation Wednesday.”

What are we supposed to do in times and cases such as these, when actions in the workplace are forcing on us things which are against what we believe and what the Bible teaches? How are we to handle a world filled with music that promotes violence, hate, and sexual immorality?

The pressures are increasing all around us in an effort to silence the church and the devil is behind it and all who would seek to silence us are his minions. While the manifestations of the attacks may have changed, it has always been true that you are either for or against Jesus and you are either seeking to gather people to him or scatter those who follow him.

“You are the salt of the earth. But if the salt loses its saltiness, how can it be made salty again? It is no longer good for anything, except to be thrown out and trampled underfoot. You are the light of the world. A town built on a hill cannot be hidden. Neither do people light a lamp and put it under a bowl. Instead, they put it on its stand, and it gives light to everyone in the house. In the same way, let your light shine before others, that they may see your good deeds and glorify your Father in heaven. – Matthew 5:13-16

The first thing for us to note is the exclusivity of the statement of Jesus. The word “are” is emphatic. Meaning we are the only salt the world has.

The word salary comes from an ancient word meaning “salt-money,” referring to a Roman soldier’s allowance for the purchase of salt. Someone who earns his pay is still said to be “worth his salt.” Salt has also been used to express promises and friendship between people. It was even considered by the Greeks to be divine.

Today in many Arab cultures, if two men partake of salt together they are sworn to protect one another—even if they had previously been enemies. In others, people throw salt over their shoulders when they make a promise.

So Jesus says to the saints that we are the only preserving and purifying influence the world has. When the church fails to slow the decay and ceases to bring healing to the world, it has become good for nothing and men will trample it underfoot.

We must recognize that if we abandon our purpose of preserving and purifying the world, the world is going to walk all over us.

The meaning of a “salt covenant” is never explicitly defined in the bible, but we can infer from the understanding of salt’s value and the contexts in which a salt covenant is mentioned that it has much to do with honoring the commands of God and adhering to the role he ordained for his people on the earth to be a preserving and purifying influence on those around them.

As for addressing home and encounters in the workplace such as people using the Lord’s name in vain, we can understand the meaning of the salt metaphor and draw our first conclusion by backing up a couple of verses.

“Blessed are you when they revile and persecute you, and say all kinds of evil against you falsely for My sake. Rejoice and be exceedingly glad, for great is your reward in heaven, for so they persecuted the prophets who were before you. – Matthew 5:11-12

The diminishing of a purifying and preserving influence “on” the world begins “in” the home; when it breaks down in the home, when we encounter the world, we are more likely to be trampled underfoot by them.

What should we do, then, when the Lord’s name is used in vain around us? What do we do when the dirty joke is being told, what do we say when evil is called good and good is called evil very much like it is already today?

We first have to remember our divinely ordained salt covenant; the church’s job is to preserve and purify, not to be popular.

Our witness is to be through our actions and not our words. When engaging with the world, we need to remember that we cannot put behavioral expectations on the unsaved that we would on those who walk in the Spirit.

Does that mean we keep silent when the name of the Lord is used in vain, or that we say nothing when the racist remark or dirty joke is being told?

Walk in wisdom toward those who are outside, redeeming the time. Let your speech always be with grace, seasoned with salt, that you may know how you ought to answer each one. – Colossians 4:5-6

Our words may not always be received with kindness, but we are never to compromise our message to avoid being persecuted or even called bigoted haters even though we live in a world where those who demand tolerance for their behavior have no tolerance for those who disagree with them.

A blessed life is going to bring opposition. The world has no need or use for a church that has lost its savor and is trampled underfoot by men.

For the message of the cross is foolishness to those who are perishing, but to us who are being saved it is the power of God. – 1 Corinthians 1:18

Sinners are going to sin and think of us as fools. Some will even hate us to the point of persecuting us.

We are not here to be popular. We are here to preserve and purify the world until God refines it by fire.

We speak the truth in love but we do not change the truth or redefine love as acceptance of any and all behaviors.

“Poor world, poor world, it is dark, and gropes in midnight, and it cannot get light except it receives it through us!… To be the light of the world surrounds life with the most stupendous responsibilities, and so invests it with the most solemn dignity. Hear this, ye humble men and women, ye who have made no figure in society, ye are the light of the world. If ye burn dimly, dim is the world’s light, and dense its darkness.” – C.H. Spurgeon

For you were once darkness, but now you are light in the Lord. Walk as children of light (for the fruit of the Spirit is in all goodness, righteousness, and truth), finding out what is acceptable to the Lord. And have no fellowship with the unfruitful works of darkness, but rather expose them. For it is shameful even to speak of those things which are done by them in secret. But all things that are exposed are made manifest by the light, for whatever makes manifest is light. – Ephesians 5:8-13

Our job as the church is to turn our neighborhoods and cities upside down. Our job at work is first to do our job as unto the Lord and for the glory of His name, and to be salt and light as opportunity allows.

This same light we are to the world is not to be put under a basket when we arrive home. Home is not where we let our hair down, it is where we morally keep our guard up!

As salt, we are to purify and preserve holiness in this world lest the world become worse than it already is.

For the mystery of lawlessness is already at work; only He who now restrains will do so until He is taken out of the way. And then the lawless one will be revealed, whom the Lord will consume with the breath of His mouth and destroy with the brightness of His coming. The coming of the lawless one is according to the working of Satan, with all power, signs, and lying wonders, and with all unrighteous deception among those who perish, because they did not receive the love of the truth, that they might be saved. –  2 Thessalonians 2:7-10

Being light includes doing good works, Paul reminds us that we do so in an age where lawlessness is already at work and the restraining force of the Holy Spirit will continue until it is removed at the rapture of the church. With the lawless one revealed signs, and lying wonders with unrighteous deception will have its day for those who chose it over the truths of God’s word.

Do we speak up when the dirty joke is told or the name of the Lord is used in vain?

What about music, what does the bible say about it?

Every mention of the words sing, singing, song or songs is in relation to, for, and about the Lord or what He has done.

Do we sing to God about fornication and adultery, drunkenness or drugs or violence or racism? Hardly, we sing to the Lord about his goodness, greatness and His mighty works which He has done.

We are the salt and light of the world and there is no other. We do not bow to the kings of the earth and we do not bend to the pressures of society.

Relationship evangelism is hiding your light under a bushel. The people we know who are without Christ are going to go to hell if they do not come to the truth and continue following the devil’s lies. Telling people they can live in ways that God has condemned is to preach for the devil and will leave their blood on your hands.

We are not doing anyone any favors by acting like hell is not their future if they die without Christ because it seems intolerant or insensitive and it’s definitely not politically correct. Being lovingly direct will not be well received by some, but it will save the soul of others. We do not have the responsibility or the capability to refine the message so the world finds it more acceptable.

I charge you therefore before God and the Lord Jesus Christ, who will judge the living and the dead at His appearing and His kingdom: Preach the word! Be ready in season and out of season. Convince, rebuke, exhort, with all longsuffering and teaching. For the time will come when they will not endure sound doctrine, but according to their own desires, because they have itching ears, they will heap up for themselves teachers; and they will turn their ears away from the truth, and be turned aside to fables. But you be watchful in all things, endure afflictions, do the work of an evangelist, fulfill your ministry. – 2 Timothy 4:1-5

We’re not here to be or become popular. We are here to be salt and light and not everyone is going to like it. Some will even persecute us for it, but we don’t change because of them or increase animosity toward our message for them.

The time has come that Paul spoke of and we must continue in it as salt and light by preaching the Word.